A Year for Action: Food and Climate

Taking agriculture and food systems to COP26 and beyond 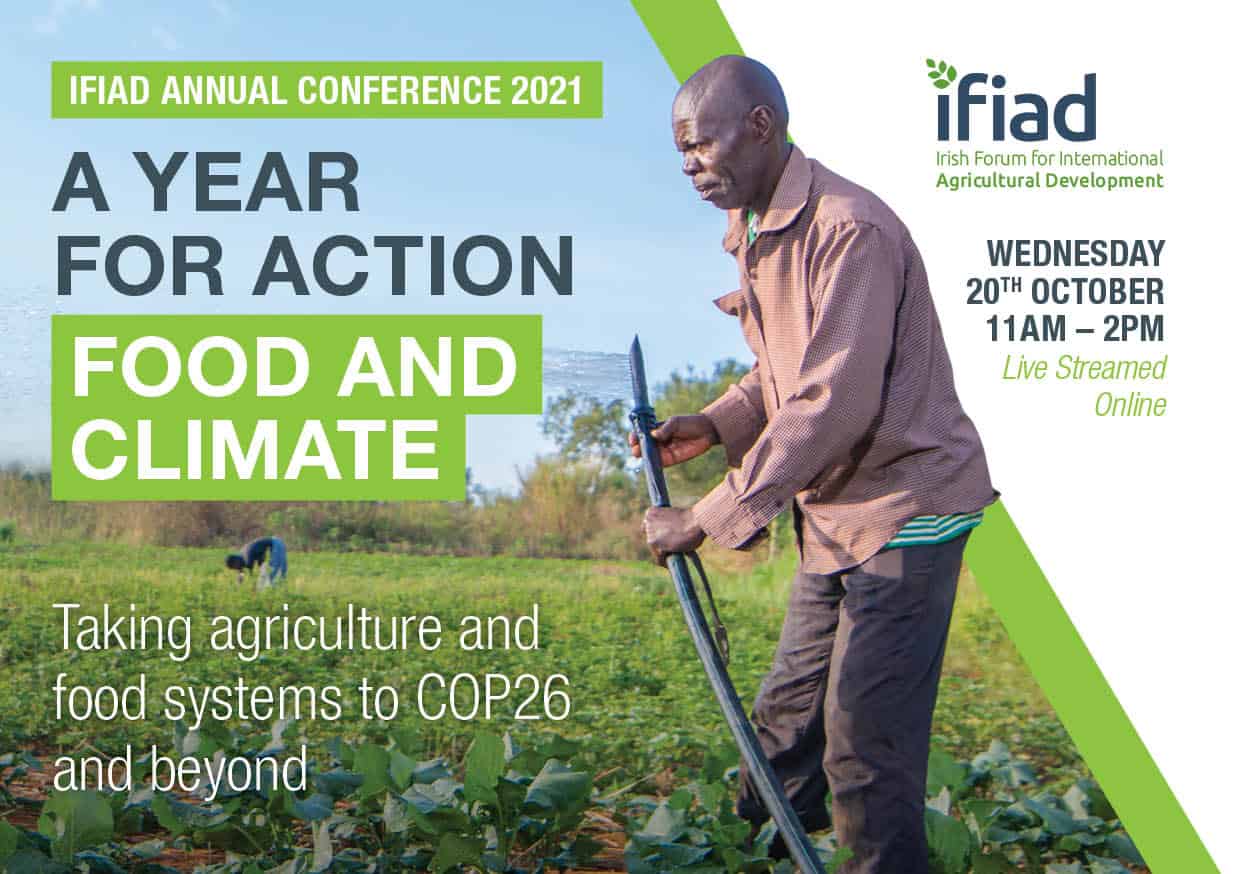 Watch a recording of the event

The Irish Forum for International Agricultural Development will host its annual conference on Wednesday 20th October 11am-2pm (online). This year’s conference comes at the crossroads of two global events – the Food Systems Summit, and the COP26 on Climate Change.

Given the inextricable links between food and climate, discussion will focus on the outcomes of the Food Systems Summit, and how action areas for agriculture and food systems can be aligned with the upcoming COP26 on Climate Change.

Mr. Maximo Torero Cullen is the Chief Economist of the Food and Agriculture Organization (FAO). He joined the Organization in January 2019 as Assistant Director-General for the Economic and Social Development Department. Prior to joining FAO, he was the World Bank Group Executive Director for Argentina, Bolivia, Chile Paraguay, Peru and Uruguay since November 2016 and before the Bank Mr. Torero led the Division of the Markets, Trade, and Institutions at the International Food Policy Research Institute (IFPRI). His major research work lies mostly in analyzing poverty, inequality, importance of geography and assets (private or public) in explaining poverty, and in policies oriented towards poverty alleviation based on the role played by infrastructure, institutions, and on how technological breakthroughs (or discontinuities) can improve the welfare of households and small farmers. His experience encompasses Latin America, Sub-Saharan Africa, and Asia

Maureen Muketha is a Nutritionist in Kenya who is passionate about achievement of Sustainable Development Goal (SDG) 2 and a member of the Un food System Summit Action Track 1 leadership team. She is the founder of a social enterprise called Tule Vyema.
Maureen rolls up her sleeves to do what she loves best – fighting hunger, malnutrition and poverty. Her efforts to raise awareness of proper feeding habits and improve food security in her community has enabled her impact over 2,000 community members through equipping them with nutrition knowledge through nutrition education talks and improved food security through training young women to cultivate indigenous vegetables on vertical gardens in over 800 low income earning households.
Maureen’s transformative work through Tule Vyema has been recognized by local and global organizations such as Shawn Mendes Foundation Global Changemakers, UNESCO MGIEP, Food Tank, Croplife International, and Oxfam.

Sinead is an independent consultant, Research Affiliate to the Cambridge Central Asia Forum, and M&E expert with the Natural Resource Institute at Greenwich University. Since 2007, her research has focused on sustainable development and food and nutrition security for rural and marginalised people. During that time, she’s worked with international organisations, think tanks, the private sector, and NGOS, including UN agencies, the Bill & Melinda Gates Foundation, The Brookings Institution, the European Commission, and the OECD. Her research aims to understand how complexity sciences can be applied to policies relating to food systems and climate justice. She holds a BSc in International Development & Food Policy from the University College of Cork, and a MPhil in Development Studies from University of Cambridge.

Connell Foley is currently Director of Strategy, Advocacy and Learning at Concern Worldwide, an international NGO focused on eliminating extreme poverty and responding to humanitarian crises with a focus on fragile and conflict-affected contexts.
He is responsible for the key functions of organisational policy and strategy, programme quality, technical support, research, learning and innovation as well as global advocacy. Concern’s international advocacy focuses primarily on hunger (especially nutrition and community resilience), climate change and conflict.
He serves on the SUN Executive Committee, the Steering Group of the SUN Civil Society Network and was involved with the leadership teams of Action Track 1 and Action Track 5 of the Food Systems Summit.

Tom Arnold is the Irish Government’s Special Envoy for Food Systems. Mr. Arnold’s primary degree is in agricultural economics from University College Dublin. He also has a Masters degrees from the Catholic University of Leuven and Trinity College Dublin.
He is a member of the Global Panel for Agriculture and Food Systems for Nutrition; the Board of the Global Alliance for Improved Nutrition (GAIN); the Malabo Montpellier Panel and the Sight and Life Foundation.
Mr. Arnold has previously served as Chair at the Task Force Rural Africa for the EU Commission; Coordinator of the Scaling up Nutrition (SUN) Movement; Director General of the Institute for International Affairs (IIEA); Chair of the Irish Constitutional Convention; Chair of the All-Island Civic Dialogue on Brexit; Chief Executive at the Concern Worldwide; Assistant Secretary General and Chief Economist in the Irish Department of Agriculture and Food; Chair of the OECD Committee of Agriculture; Chair of the Irish Times Trust and Board member of the Irish Times; Board member of the Mary Robinson Foundation for Climate Justice; and Member of the Irish Hunger Task Force. He was an Administrator with the EU Commission for ten years, serving in Brussels and Africa.

Professor Mark Howden is Director of the Institute for Climate, Energy & Disaster Solutions at The Australian National University.

He is also an Honorary Professor at Melbourne University, a Vice Chair of the Intergovernmental Panel on Climate Change (IPCC) and is the Chair of the ACT Climate Change Council. He was on the US Federal Advisory Committee for the 3rd National Climate Assessment, was a member of the Australian National Climate Science Advisory Committee and contributes to several major national and international science and policy advisory bodies.

Mark has worked on climate variability, climate change, innovation and adoption issues for over 30 years in partnership with many industry, community and policy groups via both research and science-policy roles. Issues he has addressed include agriculture and food security, the natural resource base, ecosystems and biodiversity, energy, water and urban systems.

Mark has over 420 publications of different types. He helped develop both the national and international greenhouse gas inventories that are a fundamental part of the Paris Agreement and has assessed sustainable ways to reduce emissions. He has been a major contributor to the IPCC since 1991, with roles in the Second, Third, Fourth, Fifth and now Sixth Assessment Reports, sharing the 2007 Nobel Peace Prize with other IPCC participants and Al Gore.

Dr. Ana Maria Loboguerrero holds a Master and a PhD on Economics from University of California, Los Angeles, USA (UCLA). She has more than 13 years’ experience of working on climate change challenges. Dr. Loboguerrero is Research Director of Climate Action for the Alliance of Bioversity International and International Center for Tropical Agriculture (CIAT). In this position, Dr. Loboguerrero provides strategic leadership of the Alliance’s Climate Action Research Program (mainstreaming climate action in food systems for adaptation and mitigation). Dr. Loboguerrero is also Head of Global Policy Research for the CGIAR Research Program on Climate Change, Agriculture and Food Security (CCAFS). In the latter position, she plays a major role in leadership on partnerships and capacity for Scaling Climate-Smart Agriculture. Previously, she worked at the Sustainable Environmental Development Deputy Directorate of the National Planning Department of Colombia as coordinator of climate change. While at the deputy directorate, Dr. Loboguerrero led the formulation of the Colombian Climate Change Policy, the National Adaptation Plan, the National Development Plan and the research agenda on climate change as well as coordinated technical support for the Colombian Low Carbon Growth Strategy. Through her work, Dr. Loboguerrero has contributed to strengthen the agricultural sector around the world so that it is not totally dependent on climate variability, but on the contrary, it manages climate to its advantage. Dr. Loboguerrero has used her experience working in the public sector to become a key partner of policy makers and planners so that they truly use climate information and tools to design and implement plans and strategies and find ways to make climate information useful and applicable for end-users.

Donal Brown is Associate Vice-President, Programme Management Department, at IFAD. He is responsible for developing and managing the operations that IFAD supports through its loans and grants. He oversees the programme of work of the department, which is undertaken by five Regional Divisions and the Operational Policy and Results Division.
Brown previously worked at the United Kingdom’s Department for International Development (DFID) in a number of senior positions, lastly as the Africa Director, managing 550 staff across the continent. In 2014-2015, he led the UK’s task force to Sierra Leone in support of the government’s efforts to fight Ebola. Brown worked at DFID headquarters and in field offices in Africa, Asia and Latin America, covering all of DFID’s areas of interest.
Brown holds a Master’s degree in Tropical Animal Health and Production from the University of Edinburgh, a Postgraduate Diploma in Public Leadership and Management from the University of Warwick and a Bachelor’s in Veterinary Science from the University of Bristol, as well as an Honorary Doctorate in Social Justice from the University of Winchester.

Dr Sinead Walsh is Ireland’s Climate Envoy since 2020. Prior to this she served as the EU Ambassador to South Sudan. She has worked for Ireland’s Department of Foreign Affairs since 2009. She was a Senior Fellow at the Harvard Humanitarian Initiative in 2016/17. Prior to this, she served as the Ambassador of Ireland to Sierra Leone and Liberia and the Head of Irish Aid in the two countries, based in Freetown from 2011 to 2016. She has also worked in DFA HQ roles on multilateral organisations, international financial institutions and civil society engagement.
Before joining the government, Sinead spent ten years in the NGO sector, predominantly with Concern Worldwide, working in India, Pakistan, Rwanda and South Sudan, as well as in a global advocacy role. She has a BA from Harvard University, an MSc in Development Studies from University College Dublin and a PhD in Social Policy from the London School of Economics. She is the co-author of Getting to Zero: A Doctor and A Diplomat on the Ebola Frontline, published by Zed Books in 2018.

Tokelo Shai is an agriculture analyst at GreenCape with a strong interest in the development of innovative solutions that help mitigate climate risks and promote a green economy.
She has worked in several projects related to climate finance, climate adaptation and transformative climate-smart agriculture with youth. Tokelo has been involved in several youth initiatives and forums such as the Youth in Landscapes (YIL) Initiative, World Youth Forum and the Young Professionals for Agriculture Development (YPARD). She holds an MSc in Climate Change, Agriculture and Food Security from the National University of Ireland Galway and a BSc in Chemistry and Statistics from the University of Cape Town.